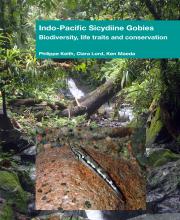 This exciting and valuable contribution summarises 20 years of extensive field studies and laboratory research on a fascinating subfamily of gobies, the Sicydiinae. Historically this group has been poorly documented leading to the misconception that relatively few species were included. However, Keith and his team of collaborators have shown that insular populations in particular have evolved a plethora of diverse forms throughout the vast Indian and Pacific oceans. More than one hundred scientific expeditions have formed a solid foundation for the revision of every genus. A special effort was made to visit and collect at nearly two-thirds of the type localities in order to “ground truth” the previously described species. In addition, nearly all the existing type specimens were re-examined, resulting in a thorough up-to-date and in-depth analysis of this interesting group.

Sicydiine gobies form an integral part of the freshwater fish community on large and small islands, as well as many continental areas of the Indo-Pacific. This book provides comprehensive taxonomic coverage of each species, including excellent photographs (many previously unpublished), diagnostic features for identification, type locality information, etymology, and geographic distribution maps. The ecology and biology is also covered in detail, complemented with habitat photographs and documentation of the early life history stages for many species.
Although providing an indispensable tool for taxonomists, the book will also prove valuable for anyone involved with environmental management, including teachers and researchers. In summary, it provides a very practical tool for understanding this amazing goby subfamily, which is an important “indicator” group for freshwater systems in general. Moreover, the book provides critical insight and background information for implementing conservation and management measures for freshwater systems throughout the region.